La Lombrives cave is one of the largest and most fascinating caves in Europe. Situated at UssatNear Tarascon-sur-Ariege en Ariège Pyrenees. The cave impresses travelers with its immense galleries, giant stalactites and stalagmites and its lake of incomparable color.

Lombrives from the origins of humanity to modern times

Shelter for prehistoric men, the Magdalenians, burial place for the man of the Bronze Age, Cathar sacred place ... Lombrives is a refuge, for millennia. This is how we find walls decorated with multiple signatures and enigmatic signs, some dating from the XNUMXthth century. It would even be mentioned, in writing, that King Henry IV came to pay a visit to the cave in 1578.

The Lombrives cave is listed in the Guinness Book of Records! The cave has been keeping its title of the largest ecologically managed cave in Europe for 30 years!

The visit begins with a short walk of 1,4km to reach the entrance to the cave from the ticket office. It is possible to make this trip with the tourist train!

Throughout the visit, the guide shows travelers the various galleries and rooms filled with concretions that make the site so rich.

Each of them has an unusual name like Le Mammoth, The Witch, The Tomb of Pyrene etc ...

Further on, the lake, with ripples and mysterious colors, is revealed.

The Lombrives cave, located in the Cap de la Lesse massif, would join by its network of galleries ... Niaux cave ! Incredible isn't it?

Events throughout the year

All year round, at the Lombrives cave, a series of events, each more unusual than the next, takes place: special children's hike, New Years… A great way to discover the cave in a different way!

Myths and mysteries of Lombrives ...

The cave has always housed some mysteries and legends that leave travelers dreaming. Among these legends, there is the one which affirms that the cavity would contain the tomb of a princess and not just any ... the princess pyrene ! Hercules, demi-god, is according to the myth, at the origin of the creation of the Pyrenees. Hercules fell in love with the princess living in Lombrives, the princess Pyrene. They lived a beautiful love story, but it cut short when Hercules is called to work elsewhere.

The pregnant princess hid from her father for fear of reprisals and decided to run away! Unfortunately a bear blocked her path and killed her. Hercules hearing the cries of his beloved, ran to his bedside and decided that the tomb of the princess would remain in the same place and that he would call his mountains "the Pyrenees", in homage to the name of the woman he loved . He would have left at the bottom of the cave of Lombrives the tomb of Princess Pyrene and would have started his work (the Pyrenees) from the tomb. 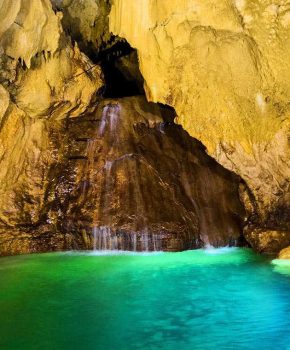 The underground river of Labouiche