Ariège is certainly the destination that still contains the most secrets, mystical places, villages, and especially castles linked to Catharism. Cathar castles, bastions of rebellion, of resistance to the Catholic Church, are exceptional places to explore in Ariège!

Cathar castles do you want some here!

The Cathar castles must be visited! Ariège is a land wounded by the crusade waged against the heretics "bonhommes" who, in the XNUMXth century, were prosecuted for having believed in their own dogma, the catharisme. It took a century to overcome the Cathar resistance in Languedoc!

Le Montségur castle is best known in the minds of travelers for its appalling stake in March 1244 where hundreds of Cathars were burned by order of the Catholic Church and Kingdom of France for heresy. It was one of the last Cathar castles taken by Simon de Montfort after months of siege.

What to say about this unmissable place, perched on its pog at an altitude of 1207m, except that it seemed unattainable ?

Find out more about Montségur

Toulouse enclave in the county of Foix, Roquefixade remains faithful to the counts of Toulouse at the time of the crusade against the Albigensians. Perched on top of an impressive cliff, thea fortress of Roquefixade, since the XNUMXth century, faces that of Montségur.

The site is freely accessible and offers an exceptional view of the surrounding mountains.

Simon de Montfort, leader of the crusade against the Cathars is said to have declared in front of the castle of Foix: "I will melt the rock like fat to grill the master there!". However, the castle remained impregnable ...

The castle dominates the city ​​of Foix from the top of its rock, its 3 towers and machicolations intact. At the top of the round tower, the Pyrenees appear before the eyes of travelers, such as the famous Gaston Fébus, one of the most famous masters of the place, saw them in the XNUMXth century.

The castle offers an incredible immersive visit in two stages: the museographic part, and the medieval part. Events, workshops… impossible to get bored at the Château de Foix!

Visit the castle of Foix

The “small” Cathar castles which played a key role

In the XNUMXth century, the castle was owned by Bernard d'Alion, Lord of Donezan, who married Esclarmonde de Foix, one of the great figures of Catharism, the sister of Raymond-Roger of Foix, 6e Count of Foix. Montaillou, like Montségur, is one of the last Cathar strongholds to fall! Destroyed by the State during the Crusade, it was nevertheless rebuilt in the XNUMXth century and served as a checkpoint towards the Aragonese border. The ruins that can be seen today are a long way from the castle which was enthroned during the Crusades against the Albigensians.

On its rocky promontory on the border with the Aude, the Usson castle is one of the oldest fortresses in Donezan. Castle of the former lords of So and Allion (like Montaillou), it is a thousand-year-old site which controlled the Aude valley and protected the country of Donezan from any incursion, and served as a refuge for the “Perfects”. Throughout its history it was an impregnable fortress, the residence of the Marquis d'Usson until the Revolution. Now consolidated and saved from probable ruin, this remarkable site houses the heritage house.

Lordat Castle proudly stands at an altitude of 965m, at the foot of the Trimouns Talc Quarry offering an incomparable view on the chain of the Pyrenees. Lordat is one of the oldest and largest feudal castles in the county of Foix. It served as an asylum for the last Cathars after the fall of Montségur.

Miglos Castle is positioned at the top of a limestone outcrop, 779 meters above sea level. Located above the village of Capoulet, in the town of Miglos, he commanded both the Miglos and Vicdessos valleys as part of a defensive system that protected the county of Foix and which included fortified castles and caves. Arnaud de Miglos, Lord of the place, was locked up in 1244 by the Inquisition, for him too, having sheltered fellows in his enclosure.

You are passionate about Catharisme ? Learn the whole history of this dark period in Languedoc! 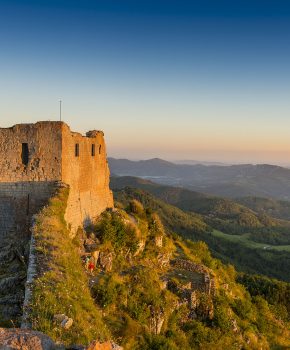 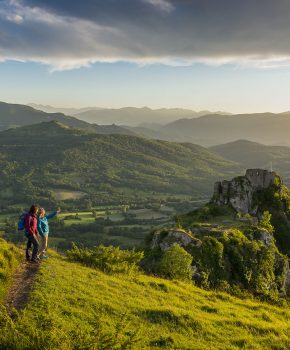 Circuit to discover the Cathar castles