Montsegur, Foix, Mirepoix, Saint-Lizier, the testimonies of the medieval wealth of Ariège are discovered in a magical landscape which has for eternal backdrop the majestic chain of the Pyrenees.

La city ​​of Carcassonne is located just 30 minutes from Mirepoix! During your holidays in Ariège, take the opportunity to go for a walk on the ramparts! It is a great must-see site in the South-West!

The largest underground network in Europe is deployed in Ariège. At all times, men have found refuge there, leaving many traces of their occupation. The oldest date back to the Magdalenian period, the last phase of the Upper Paleolithic, 14000 years ago. Living in small communities of hunter-gatherers, they left in our caves their tools, their weapons, the remains of their old homes and, most remarkable, many traces of their art.

The Great Sites of Ariège are only 1 hour / 1h30 from theToulouse-Blagnac airport and theCarcassonne airport !

To prepare for your visit ... 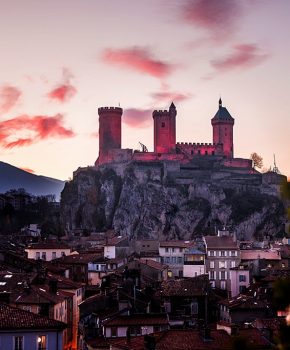